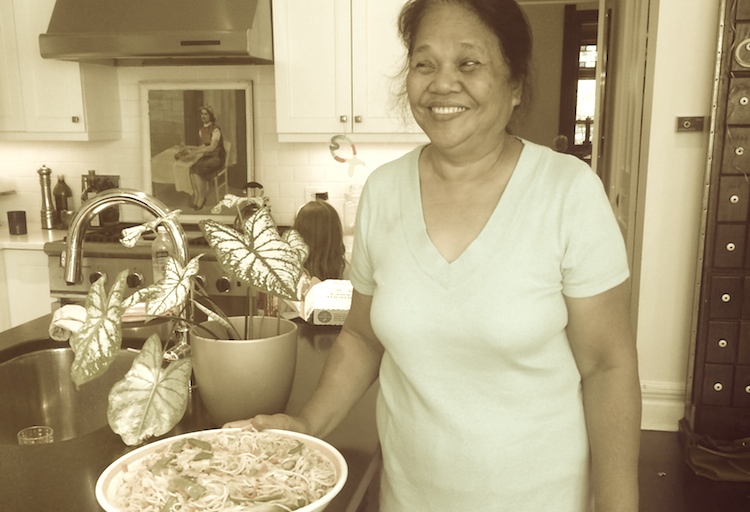 I understand that “birthday saturnalia” is not one of those roll off the tongue sentiments that we pull out in celebration. Still …. saturnalia is a worthy noun and I would like to circulate it.

Saturnalia means feast. In this case, it is a perfect moniker for a phenom of a dish.

The benefactor in this story grew up in Paranque City which is situated in the southern port of metro Manila in the Philippines. Her name is Thelma Lombos Caldwell.

After living in Hong Kong for some years, she moved to Chicago. She worked from that time forward as a nanny.

She came into my Chicago children’s lives five years ago. She has blessed them with loving care.

For birthdays, she prepares the celebratory dish of her homeland – “Pansit”. Food lore in the Philippines has it that noodles should be eaten on one’s birthday. The noodles represent long life and good health and must be served uncut.

Each birthday she comes through the door bearing a broad smile and a large platter of Pansit Canton.

“As soon as Elodie began solid food, I fed her this dish,” she says with a beautiful Filipino twinkle in her eyes.

Thelma insists that the dish tastes differently depending on who prepares it. “My mother used rice noodle and I prefer flour stick,” she says.

I find it to be the sort of eating that brings relief, as if you have been dreaming about such a dish your entire life, but did not know where to find it.

Every Weprin birthday as we anticipate her arrival  with that big bowl saturnalia, nothing will do but to rush for the spoons and prepare for well-being.

Like all wonderful cooks, Thelma gives vague instructions, dwelling on the ingredients which she insists should be changed to reflect the season.  You know what your people like, amounts can reflect their favorites.

Fish Sauce, to your taste