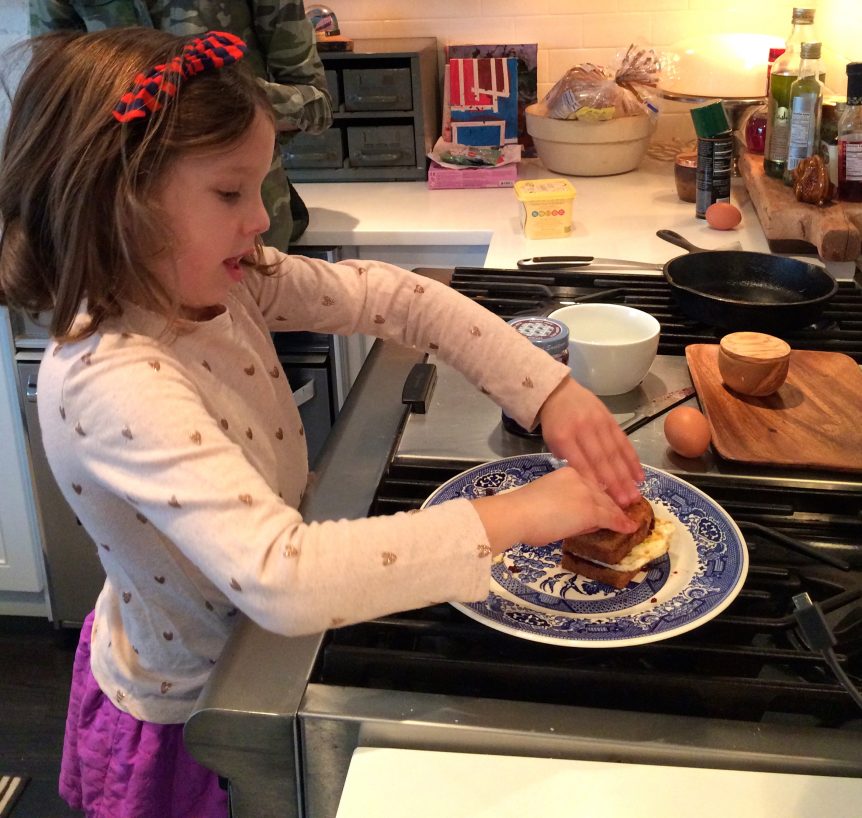 Of magic doors there is this, you do not see them even as you are passing through. Anonymous

A solid 19 inches of snowfall. Treks to and from Chicago are halted. I am snowed into an urban fairyland – an enchanted zone where my granddaughter Elodie is available to expand on the first selection in her cooking repertoire.

“It’s a mama sandwich,” she says with a laugh that erupts in a girlie giggle and slides into something deeper, more melodic. The sound is a muse for my old age.

“First what you need is a black stool to stand on, but really I like to climb up on the counter without a stool,” she says as she trails off in search of that most utilitarian artifact. Her mother is watching.

She reminds me that she eats lots and lots of eggs though she has not decided how to take them in her lunchbox being a fancy, new, all day kindergartener at Lincoln Park Elementary School.

It is clear that she likes details. “But what you’ll need is eggs, jelly, salt, pepper and whatcha may call it?” “An English muffin,” her mother says. Eyes closed, Elodie gives me a solemn nod to confirm.

With a signal from her mother she picks up the tempo. “And since we are out of those, we can use whole wheat bread,” – she musters the authority of a first born and instructs her mother to add bread to the toaster.

Even at 5 years old, she is practiced at breaking eggs. After she preps the pan with butter spray, she cracks one into a small bowl and heats the iron skillet by turning the gas on high. “Don’t ever touch the pan, Gal (my grandmother moniker),” she says, “And don’t stir the egg.”

Elodie has made the promise to all listening that she will cook “for her whole life”. I calculate the possibility of her making this dish for me when she has her own place at say – age 25. It could happen. I figure on 8 decades.

I start to let her in on my plan, but then she says, “Mama always said to get very close to the pan when pouring the egg. Hands not too close!” Wide-eyed, she blinks for emphasis.

“Fast as you can – pinches of salt and pepper – I do not like my yolk really very runny – I can tell when it is done,” she says swirling the spatula in the air.

The egg is flipped with some help from the mother and then flattened with the spatula. As all cooks know – novice or seasoned, timing is of the essence. While the egg simmers, she artfully butters the toast. “Oh, you want all the bumps of jelly to spread out – unfortunately, I don’t like bumps,” she says.

She completes her soliloquy by listing some remaining instructions:
“Be sure to close the jar of jelly and then cut your toast in half. I like to salt and pepper – cherry or grape jelly always, then the egg and other half of toast to make the sandwich.”

As she concludes the demonstration, she takes a giant bite satisfied that this is still her best dish, but she adds that her favorite meal is hummus, bell peppers, ice cream and cookies.

I ask her about her dream kitchen and she quickly elaborates that it will be purple, blue, white, turquoise with a touch of pink. She laughs. “I like a stove and microwave too,” she says as she scurries off to collect her favorite kitchen tool – a red pastry brush. She presents it to me with a frown – “We really don’t use it too much – just for butter.” “Don’t forget the egg wash for cake and chicken pot pie,” her mother prompts.

“I wish I was French,” Elodie says. She has new friends in her class who have moved to Chicago from France. She is entranced by them and sometimes speaks with a French accent at breakfast.

“Elodie makes a really good peanut butter and honey wrap that she takes for lunch,” injects her mother, but by this time E has scooted off to another room to see what her sister Dalton is doing.