I wanna be front porch rocking’ with a big sun droppin’in a blue sky Kick back n’get high on the living’ part of life. Eric Church

Crazy idealistic is a note that I could ascribe to my younger self. A puzzle piece to that personal trait is a nighttime dream which lingered for years until I discovered, as a grown up, its real life twin.

They say that dreams can represent unconscious desires and wishes.

When I awoke from this vision, I was startled by both the kooky impossibility and the solid feel of reality. It was a dream that dwelled in the corners of my mind until, boom. It materialized.

And just so you can feel the illusion with me: there were colors, and flags and tropical heat. There were happy squealing children running in exploration like their lives depended on it. There were horses and race cars and a non-stop carnival. And there were musicians playing their hearts out.

The variety of humans all around were glorious in color and thought and in talent and simplicity. There were vegetable growing contests and baby animals on call. And wisdom. Wisdom for the taking from elders seated on porches while giant trees swayed nearby.

Generations explored the past through food three times a day with snacks served up on card tables and kitchen counters. “Did you know that Grandmother made this layer cake for the cake walk?”

The Neshoba County Fair. Philadelphia, Mississippi.
I had heard of it – a nationally recognized political stomping ground with wacky sidelines of fun. I never attended while at a nearby college, but was intrigued by stories of colorful family cabins passed from one generation to the next.

Much later a call came into my adult life from longtime friend and Dallas resident Bonnie Bee Thompson. She invited me to come over and play at Cabin 27, a fair residence that had been purchased decades ago by her grandmother for sixty dollars.

Bonnie later explained that she viewed me as “flexible,” the only requirement for a sleepover at the fair. And there were just so many beds available each night outside the ones claimed by a growing number of family members. Honored, I bit for a six hour road trip that produced a remarkable 24 hour experience.

The National Geographic once covered The Fair. The photos were enchanted and dreamlike and that is exactly the state in which I found myself when I strolled under the arched fairway entrance which announced that my childhood dream was about to actualize.

Instantly I was indoctrinated to porch swinging a la companions national football hero and presidential home curator. Bonnie led a traipse though three cabin kitchens to fill our luncheon plates; we played a game or two of hearts and later I donned all-white as a first-timer at The Fair Virgin Party. Celebrating the day carried through as we danced in community around the rough hewn Founders’ Square pavilion fueled by cold beer and a rocking band. The next morning, I hugged Bonnie Bee goodbye and cast a prayer that I might be invited back one day.

Cut to the magical part of the deal many years later, where one might say, “life is stranger than fiction.” I found that my mid-western son-in-law had a never-ending affection for The Fair. Long time Neshoba County Fairites had taken his youngster self in as family and shown him the way.

In the meantime he and my daughter huddled a game plan and bought Cabin 82. They made it official – an annual trip from Chicago to The Neshoba County Fair would secure the southern culture for their three daughters and maintain a tie to cousins up the road in Jackson.

And as for me, I reclaimed the dream delivered long ago about a razzle-dazzle place staged for one week each year. It is as zany as was promised. And like my daughter says, “After a while, you find that personal fair flow and then there it is – lots of discovery and lots of love.” 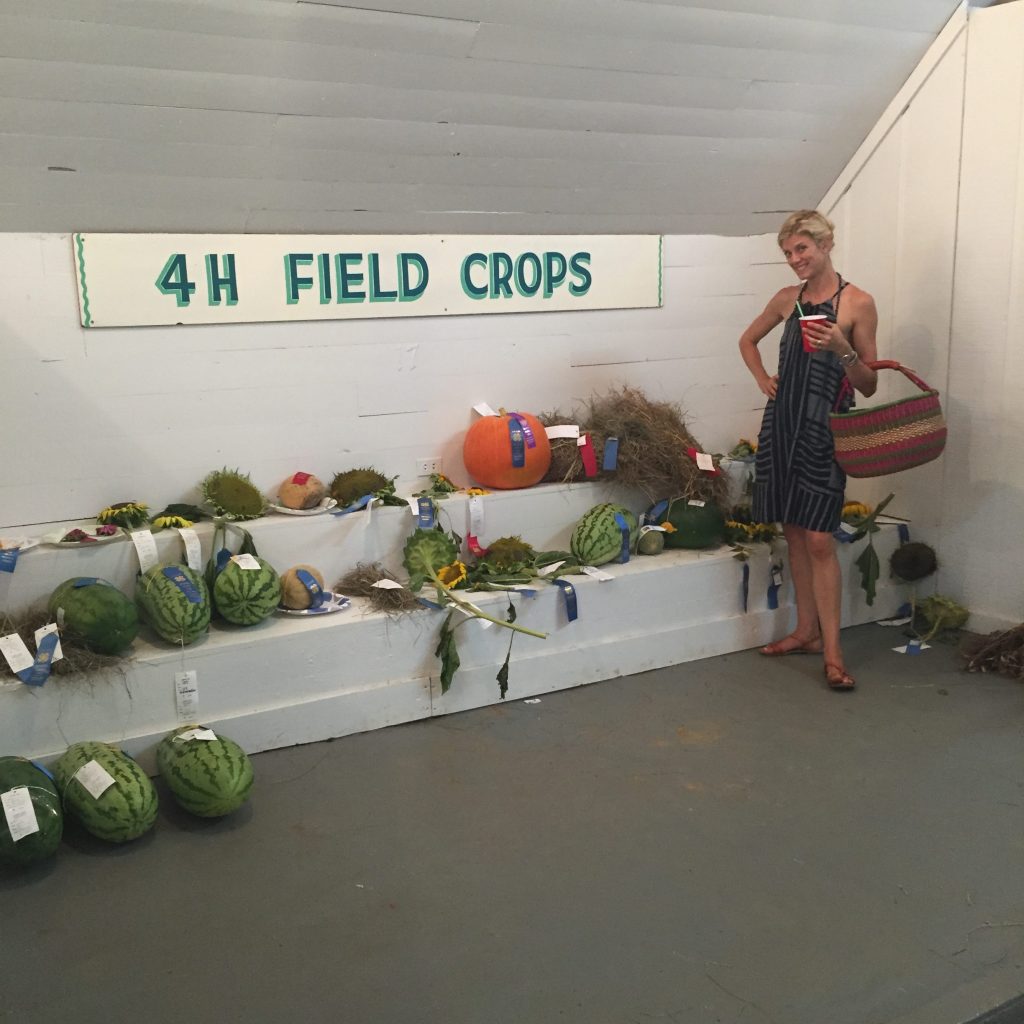 How to describe the novelty and richness of the week stumps even the most gifted story teller. Maybe it’s told by the fair ride with your grandchild or checking out the pretty cow contest; it may be by twilight on the race track sharing stories with a new friend; or maybe (most probably) it’s Ellen’s peach daiquiri; perhaps it’s in the Saturday night dinner and Sunday lunch spread soulfully prepared next door by Joe Lynn, Tommy, Cynthia, Olivia and Sid; or it could have something to do with the soft southern accents which float over all.

To be sure, my son-in-law Ben, a destination connoisseur, knew what he was doing when he suggested putting down roots in a place that he first recognized to be “thin”. Life hums with a certain je ne sais quoi at The Fair, this miniature and very thin city. New York Times writer Eric Weiner once shared, “Thin places relax us, yes, but they also transform us – or more accurately unmask us. In thin places we become our more essential selves.”

This summer my essential, fair-weary self pulled alongside a gas pump, half-way home, to fill the tank and I smiled to I see the red clay of Neshoba County under the cap. My eyes filled with happy little girl tears for the amaranthine dream that this exotic pilgrimage brings.

Fair food is a genre all its own, but when interviewing fair folk, fried chicken always rises to the top and the proof is in the process because frying chicken “takes a minute.” What I know of Ida Mae is that she is joyful and loving and she can ever fry chicken. The following is the way she spoke the recipe to me after she completed a batch. Next year, she recommended that I fry some myself as she looks on. “Teach a man to fish,“ as they say. I cannot wait. 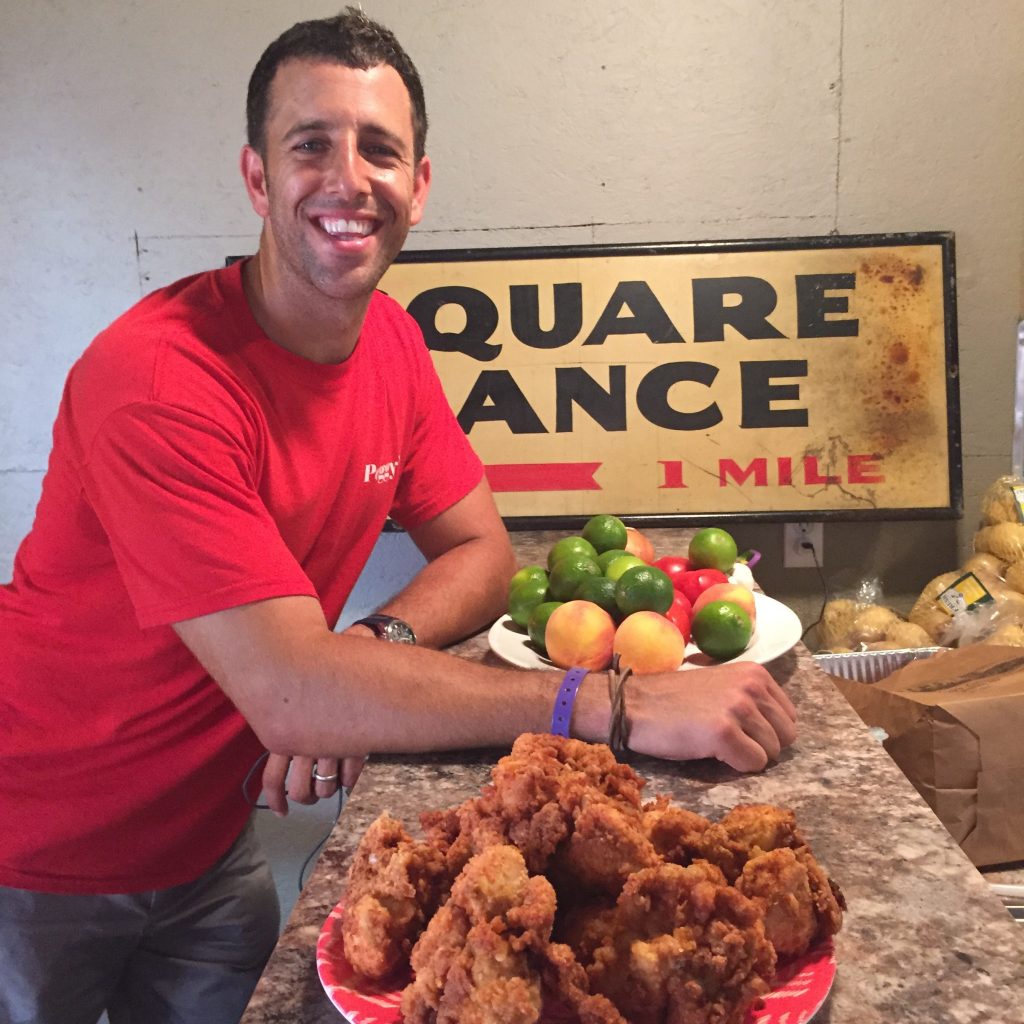 Cut one chicken up or buy pieces that constitute an entire chicken.
Wash chicken pieces.
Season with Tony’s, Ma Surber’s and Garlic Powder.
Once covered with spices, place pieces in a big plastic bag and whoop up together with flour.
Dip pieces into the sweet milk.
Set oil in electric fryer to 350 degrees. The oil should be deep enough to cover the chicken pieces which are frying.
Drop one piece into the fryer to test the seasonings before hand. When done, taste and correct seasonings.
Cook the remaining chicken pieces until brown on one side and then turn over with fork to brown on the other side.
If the electric fryer is large enough, when done, the chicken pieces will rise to the top.