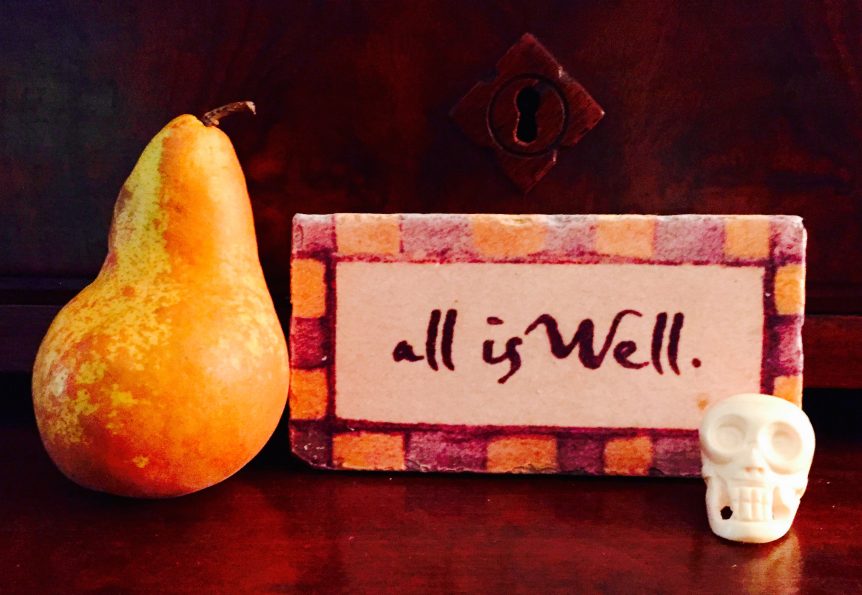 Memories, spoken and unspoken, are our constant companions.Stephen Tobolowsky

The first scary things in life cling like the contacts on my eyeballs which have been key for sight since 1966. I shiver to think what my plight would have been in another time – chair caning in a dark corner? And just for the record, such a vision cranks up empathy for the nervous way I began life.

A nail biting, bed wetter, I was inclined to check under the bed and in the closet for God knows what. Context is important here because early on, I took to scanning telephone wires for the Fifty Foot Woman, a counterpart to the 1958 science fiction horror movie.

With gratitude I can testify that those years were embroidered with my father’s ability to emancipate. He would pat my back as I described unrelenting visions of a gargantuan ball traveling through space.

Often the sphere would float through blue skies though there was a pending dread of raging storms.  My tiny speculations prevailed: Would the shiny orb keep going? What were its sinister plans? With certainty I knew that if the ball was confronted, we were goners.

Many big breaths later, those childhood fears desisted. The life metaphor of pushing through reigned, but not until I learned to deal …. with the hideous pear.

Surely after unrelenting spheroid visitations, there could not be more. But yes and I have an assembly of cousins, playmates and a sibling who can all attest to the same terrifying specter. From saner harbors, they are childhood witnesses to my grandparents’ basement and to those preserved pears, whitish orbs in glass – lined up high up on a shelf above the cement basement steps descending into Mississippi clay.

Big Magic author Liz Gilbert helped me out here.  She said, “Here’s how I’ve learned to deal with my fear: I made a decision a long time ago that if I want creativity in my life – and I do – then I will have to make space for fear, too. Plenty of space.”  And no doubt there was plenty of material in that basement to fill that space.

Trips to Canal Street in Yazoo City offered a lot to the frisky imagination and its resulting fears. The basement alone brought on chills away from the un air-conditioned Mississippi Delta heat. Enchanted entry to the basement was introduced as one of eight doors tightly closed onto an interminable L shaped stucco hallway. The occasional framed ancestor was suspended from high up on a picture rail strung with long lengths of picture cord along the L. All very precise and unnerving.

The most unsettling portal was located at the hall turn. Identical to the others, it opened desperately onto pitch blackness and only a flashlight could illuminate the creepy staircase that sought a light switch. The earthen cave was lined with walnut stained bead and board paneling with a minuscule ground level window hovering to reveal cob webbed shelving, a built in bed and countless folding cots and blankets. Documentation of my grandfather C.M. Griffith’s cattle ranch anchored the corner with a watery depiction on metal of a Hereford.

We staged many a haunted house and capture the victim under Canal Street in that basement.

Alongside the safety of my grandmother’s soft form, I slept fitfully during those Yazoo City visits. The boy cousins, brother and my grandfather manned up in the basement.

What kept us tossing and turning?  Was it all that day trade in the basement? Or the heat? Mayhap the multiple closet doors ajar?

Only recently have I realized that the jolts came by way of the sound of a kazillion ripened pears releasing from the side yard pear tree….(e.g. the pear preserves).  Ah Ha, they buried their way into my psyche.

Undefined basement fear persisted until I was thirty and married. Relief came in the form of our next door neighbor, the genteel and ninety plus, Sarah Reilly.

One morning as I blearily gazed out the window having pulled an all nighter during the business trip absence of my husband, I saw Mrs. Reilly open her front door and smile into the air. She sauntered to the mailbox and with  ethereal calm gazed my way and waved assurance.

I was never the same. Just like that, a lifetime of free floating fear disappeared. Because I found that: the giant balls in space, the pears, the basement, the test, the sickness, the ocean, the war, the misunderstandings, the monkeys with big teeth at the zoo, the math, the frowns on my children’s faces, the people who do not like you… they are all scary things. And they can gain on a person.

It takes a faithful someone who has been there before to take lead down the primrose path.

Today I call that sort of awareness – grace. And now, I am the one who does her best to preserve the pears.

Place pears in large stock pot, add water to cover and boil till tender, about 20 minutes. Drain and cool. When pears are cool, peel, core and coarsely chop.
Place pears, onions, green bell peppers and jalapeno peppers into a food processor, working in batches and chop the pears and veggies finely. Transfer pears and veggies including juice to large pot.
Stir in vinegar, sugar, mustard, salt into pear mixture and bring to a boil; reduce heat to medium-low and simmer until flavors have blended and relish is thickened about 1 hour.
Sterilize jars and lids in boiling water for 5 minutes. Pack pear relish into the hot, sterilized jars, filling the jars to within 1/4 inch of the tops. Run a knife around the insides of the jars to remove any food residue. Top with lids and screw on rings.
Place a rack in the bottom of a large stockpot and fill halfway with water. Bring to a boil over high heat, more boiling water if necessary until the water level is at least 1 inch above the tops of the jars. Bring the water to full boil, cover the pot and process for about 20 minutes.
Remove the jars from the stockpot and cool. Once cool, press the top of each lid with a finger, ensuring that the seal is tight (lid does not move up or down at all). Store in a cool, dark area.