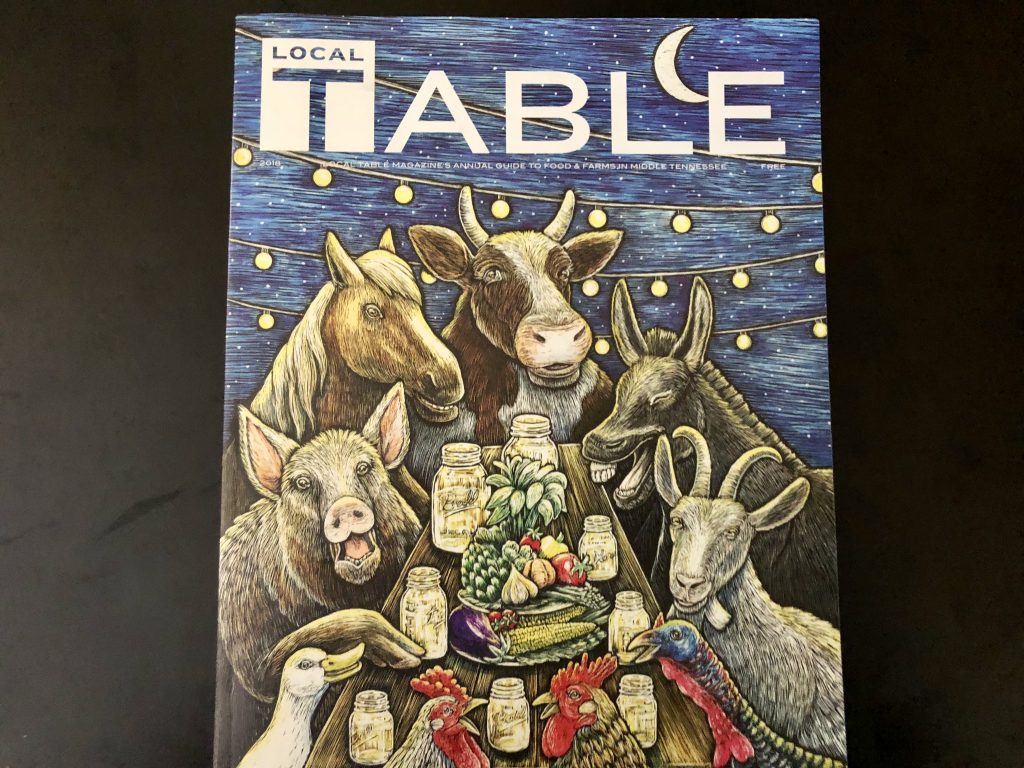 We have all known the long loneliness and we have learned that the only solution is love and that love comes with community. Dorothy Day

Here’s hoping that you have an inkling of the glorious, year round variety of local food that is available for the picking in Middle Tennessee. But dig deeper and consider the folk whose state of mind created the planting, the harvest and the market day, jiggitty jig.

Who are they? And why, when in many cases they have nary a childhood reference, did they chose such a venture as farming? The vocational pull is not what you might expect. As Andy Couturier, guest on the podcast The One You Feed, said, “Many younger farmers today are not into it as a return to the past.”

With a smorgasbord of choices, for them the farming life is an exploration of a best way to live, a striving for that which brings satisfaction by building sensitivity for sustainability. And this take on life brings along with it some old fashioned notions that fill the soulful hole that is often unrecognized.  Like getting to know your neighbor.

An example of a tale worth telling begins with Wilson Fly, the owner of the Fly General Store, located in the Fly neighborhood of Santa Fe, Tennessee. Got that? A tiny community within a tiny community. In 2014,  a stream of back to land types were inclined and Mr. Fly was there to frame the hamlet.

Kerry and Jason Suits of Fly Ridge Cattle Company  flyridgecattle.com who now raise Wagyu cattle hold onto the memory of rural newness. Kerry, who also maintains the oral history project flybackinhistory.com, says that during a research trip to the area, they found the Fly General Store to be the heart of the community.

“These days I take my children for ice cream and to see the creek that runs near by. The fellows there are welcoming,” she said. And then another unexpected venture opened their hearts. Her son calls it Happy Neighbor Night.

It’s as if the store had an otherworldly way of recruiting a remarkable bunch of folk when along wandered in the instigators of neighborly logistics, Athena and Jesse Fleisher. They had conducted a global search and selected 55 acres in Fly, Tennessee to call home http://athenasharvest.com.

Here Jesse could expand his incomparable background to provide the public with a range of nutritional foods and Athena could continue her international works in public health and agriculture. They both would continue to teach.

The Fleishers have an exceptional experiential base from their work with the Peace Corps in Africa. By farming a mere 1 1/2 acres in their new home, they have been able to service two farmers’ markets, a CSA and a few restaurants.

From the beginning, Athena was intent on bringing her particular light to the situation. She says, “I wanted to create the space – a consistent place in time very much like market day in Africa. This was the way that Neighbor’s Night was born.”

A call went out to “bring a chair and a dish to share” and so began the journey of a weekly Thursday night gathering at Athena and Jesse’s place, Athena’s Harvest Farm and Training Center.

“We feel lucky…like we stumbled into something great,” says Jon Giffin of Forest Gully Farm who with wife Mandy and their two sons rely on permaculture and good forestry techniques while harvesting from animals, bees, herbs and native plants http://forestgullyfarms.com.

“Each person in attendance is working the land in different ways and we agree that of all the seeds we plant, community is the most rewarding,” he says.

A farm over, Samantha Lamb and Daniel Foulks, tend The Farm and Fiddle http://thefarmandfiddle.com, a CSA with specialty value-added products. Sam Lamb says, “Neighbor’s Night is a place that I can roll up to from a week’s work, put my sun dried tomatoes on the table, gather and relax with friends.”

Up to forty people attended Neighbors Night in 2017 which harbored multi-generations, not to mention multi-talents. Jon is thankful that his sons have the chance to hang with older musicians. “These get-togethers give us what we have been searching for – finally, a place where we were meant to be,” he says.

Photographer and flower farmer Sarah Gilliam, her husband Patrick and their two children moved to the area from a place where they had known everyone. She touts the circle that Athena creates  each Thursday evening when everyone tells where they live, where they came from and what they brought to eat.

“The openness feels sacred; it’s fellowship on a high level,” she says citing respect as a result from the exchange.

And former city folk Claire and Adam Crunk and their three girls who have recently purchased an adjacent farm to Athena’s Harvest are beaming with the perks of rural living. She says, “Whether it’s a call to help in the form of re-trellising the tomatoes, harvesting collards, or rounding up goats, we help each other and have found excellent advice as newcomers for our chickens, fruit trees and flowers.”

Eighth grader Bella Crunk says, “Everyone is the ideal person who you want to hang out with.” Claire acknowledges that Neighbors Night is like going home for a family get together – “It’s a village where we are all raising the little ones. During Friendsgiving, the final Neighbors Night of the season, many folks have tears in their eyes from the familial vibe. “Divine intervention that we ended up here,” says Claire.

Something remarkable is brewing. Not the least of which are the children who scatter in play and are afforded thematic lessons in the living. Athena calls for celebration of food and culture. Greek, African, Mexican and Ramadan, so far. “Inclusion is important to us,” she says. Jesse offers that the farm interns find the night a most satisfying part of their farming experience.

Jesse and Athena’s professional-city folk family members came to see what it was all about. Athena laughs – “My sister-in-law said, ‘You’ve ruined me for everyday life’.”

Because in fact, a missing piece is up for discovery in Fly, Tennessee. When The Korean Farmer Stephen Bailey of Kindred Farm http://thekindredfarm.com says that the spirit of community thrives in Fly, he not offering platitudes. He speaks of supporting people who will serve you in times of trouble and rejoice with you when awesome things happen.

Like that particular Neighbors Night when everyone floated in the Leiper’s Creek Christmas Parade. “We threw seeds, of course,” says Sarah Gilliam.

As Shozan Jack Haubner once said, “It is not you and then me; it is two halves of one experience.” Just like Neighbors  Night in the Fly community where each one bring a chair and a dish to share.

A dedicated reverence for Anthony Bourdain.  In appreciation for his fearless wit and examination of community and the world. Peace be with you, love.