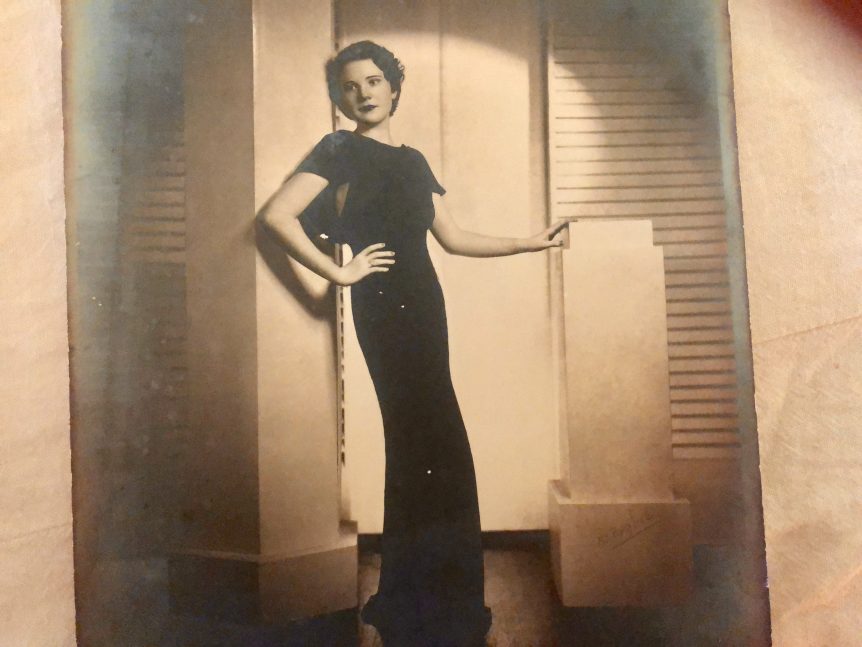 We’re after the same rainbow’s end, waiting’ ’round the bend my huckleberry friend Johnny Mercer

She was 61 and I was 24 when we met at the see and be seen location of Lefleurs Restaurant in Jackson, Mississippi. Dalton and I were writing the first page of our adult life together by introducing our parents in rooted territory.

After cocktails and a round of oysters on the half shell, oysters Rockefeller and oysters Bienville, we celebrated with a menu of creole influences involving spoon bread, Trout Meuniere and West Indies Crab Salad all of which were specialties of the house. I’ll bet that my future father-in-law insisted on paying for the whole shebang.

With a rusty red cloud of hair, Ethel greeted us adorned in a loden green suit, delicate earrings and necklace of the estate variety, also sensible shoes which she scorned. Her musical laugh made me want to give her a big squeeze.

My mother later said she had beautiful breeding. Her husband Billy was shockingly exuberant in contrast.

They were a mismatch except for the children they produced. The middle boy, my husband Dalton, proved to be quick-witted and attentive to any and all. I was lucky to find him and his lovable virtues that he suffered to obtain.

Though she had a tight group of girlfriends, Anna, Dean, Frisco and Jane who hovered for a lifetime about her like fairy godmothers; Ethel was wary of the feminine. Maybe it came from decades of the four man household-immersion which left her reeling. Still there was a palpable grief that trailed after her with the loss of her favorite companion and sister Eva Lillian.

She grew up in the Mississippi Delta and was waited on in high style by merciful men and women in the domestic uniform of the day. She genuinely loved them all and spoke with endearments concerning each one.

They cooked and cleaned for the McBee household, laid the fireplaces in each bedroom, polished their shoes and only the good Lord knows what else.

Later while on a visit to her hometown, she saw from across the street Mose, their expert butler. She flew toward him with exclamations of delight. “He turned and walked in the opposite direction,” she said with despair and unconscious surprise.

As for her own kitchen, she employed a series of cooks who were schooled in the magic of both soulful food prep and child raising. She still dabbled though, reading cookbooks like novels and scratching out a few recipes now stained from a sweet tooth on the make.

She revered seafood and was bewitched with Mr. Duggan, a gentleman who drove an ocean smorgasbord from the coast by truck to sell in Jackson each week. Her delight of fancy seafood dishes were embroidered throughout her conversations.

I worked for her trust and finally she delighted in the outcome of her boy and his girls and relaxed with me. Perhaps it was a disappointing relationship with her own mother-in-law that gave me the best she had to offer. She was respectful of my ways often so different from her own.

Gift giving gave her pleasure; I still wear a pearl bracelet she brought to me, stowed away in her purse from a trip to China. A generous nature carried through from the grandeur of childhood.

One summer day she brought her canning gear to our little house down the street from hers. Her instructions on the “fun you’ll have” of putting up okra, squash, pickles and pepper jelly were enlightened. She and her friends always shopped the farmers market, then spent the day together prepping the goods and finally reaped the rewards by splitting the outcome when happy hour arrived.

Many years later when trauma and poor health got the better of her regal bearing, she took an embarrassing spill after going through a Christmas Eve buffet. I was appalled at too many cocktails but my Mother said, “Things are not so easy after life has taken its toll.”

The most sanguine detail of her day was to be able to sit and look outside; I wish I had sat down close beside her, taken her hand and asked her for the details of what she saw.

This recipe is a favorite in the annals of many Mississippi households. Fresh crabmeat is the ticket. Just as her grandmother Ethel, my daughter Quinn visits Mr. Duggan’s son’s truck in Jackson and serves West Indies Crab Salad to her family having been provided the recipe by Dawn Moore via her mother-in-law Mary Belle Moore.

Put some of the chopped onion in bottom of dish. Place crabmeat on top of this. Add balance of the onion.

Salt and pepper and do the following in order: pour oil over the crabmeat, then vinegar, then the ice water. Do not stir.

Stir slightly before serving with crackers.