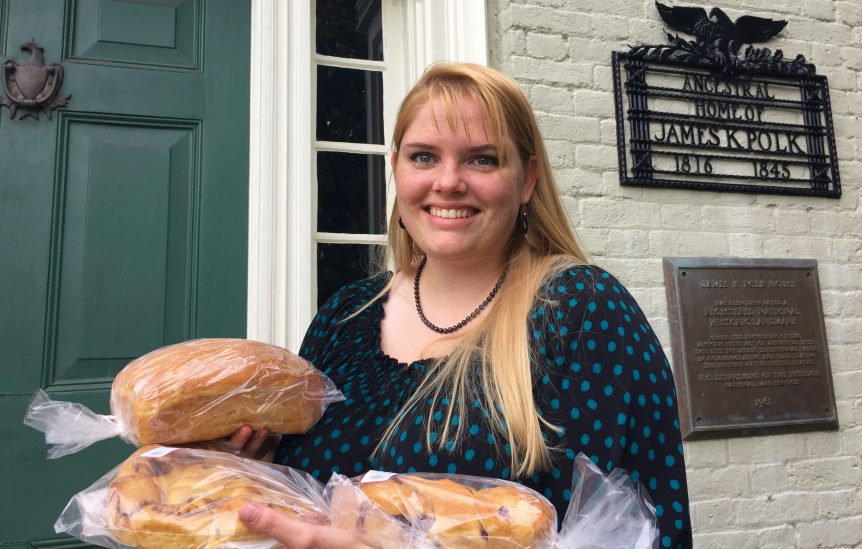 On a crest above the town proper of Lynnville, Tennessee lives a lovely soul who is baking her heart out. She got lucky during creation and was gifted with a multitude of talents, not the least of which is her sunny disposition.

Originally she came to town with a friend to preview the Lynnville Tractor Pull and it was there she began to settle in and eventually marry. Jaymi Collar Ray and her spouse now share a son Jaymes and a Giant Schnauzer named Scotty.

They live in a enchanting simple folk Victorian home built in 1896 which they restored and modernized to accommodate a young lifestyle including a beautiful kitchen just perfect for a whirling dervish of a cook.

There were no early clues on how Jaymi came to bake nine batches of delicious sourdough based loaves some weeks. Likely it grew from a propensity for pitching herself into whatever strikes her fancy.

Kitchen clues were not apparent when she left her childhood home in Orlando, Florida bound for glory with a NCAA Division 1 Athletic Rifle Scholarship at UT Martin. Late in high school a family friend suggested that she was a good shot and a natural for the team sport.

Indeed she was, racking up accolades as she pursued a degree in geology. She took a job one summer at a pizza place with handmade operations. “This is where I got a feel for dough,” she flashes a 10 million dollar smile which is the main event upon meeting Jaymi.

Many folks have been privy as she is a docent, par excellence, at the James K. Polk Home in Columbia, Tennessee. Prior to the post at a presidential home, she claims a love for world history and says, “I relate to things in the form of a story.”

One sees the old world reflected in her home filled with photographs including several of her immigrant grandparents, “Opa and Oma.” She is quick to detail roots in Frankfort, Germany and loving stories of a strong people. “My great grandfather was a tailor who refused to make the SS uniforms,” she says.

Jaymi is prideful too in her baking promise – “My dough never touches a machine. I would never double it. Every batch is cared for.”

“Bread baking comes back to shooting the rifle,” she says. And she explains that as she approaches bread baking, she thinks of early training on the range: precision (being consistent) and accuracy (hitting the target).

Jaymi recommends the best use of this bread – toasted with butter and jam or as the base of a wonderful French toast. Along with a broad menu of baked goods, she offers sourdough starter at Bakes by Jaymi – 706-897-4313

Mix and knead dough as usual, excluding last two ingredients. Cover with plastic wrap and allow to rise for 8-12 hours. Knead dough and separate into 5 equal portions. Flatten dough, sprinkle entire surface with cinnamon and sugar mix and then apple chucks. Roll each loaf up, cut each loaf in half and twist the 2 pieces placing each loaf into pan. Allow to rise for another 8-12 hours. Bake at 350 for about 30 minutes.